Where do you crossover your Klipschorn and subwoofer for 2 ch. (plus sub) music? 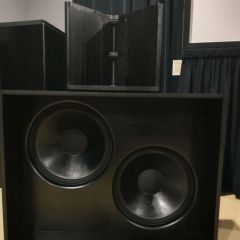