The Phantom is dead. Long live the Phantom. 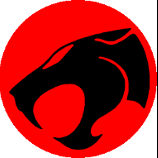