Cheap chip amp and a sub with old Heresy speakers. 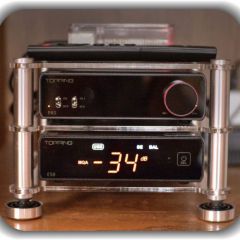