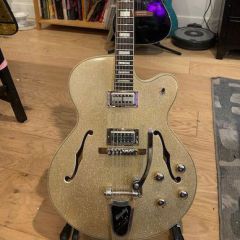 By gigantic,
August 29 in Technical/Restorations

finally, for today, I did an preliminary pass of filler for the staple holes, gouges, scratches dings and chips, then applied sanding sealer and grain filler. Tomorrow, they'll get a coat of primer an

more progress: finish is done and will cure for a few days before assembly. While it's not nearly as good as the finish work I've done on guitars, considering where it started, I'll take it. for refer

primer brought out a few finish flaws, so it got sanded and filled:    I've applied a couple coats of Alkyd enamel: