Advice for the newly addicted. 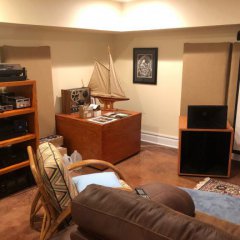 You are off to a great start.  There are better speakers in the world than Klipschorns, but not many, and not by much!  You really are starting pretty close to the top of the heap.  I think your amp c

I agree with @richieb   Nothing wrong with using a cheap amp for the time being. Don't rush things, take baby steps. That said, you will eventually want to end up with a tube amp to power th