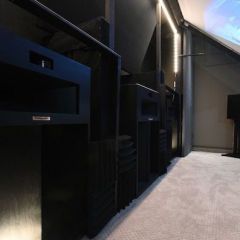 135" screen, Epson 5040UB projector, Khorns, kplish rear, center and subw, soundproof room, acoustically designed.  I love my Khorns more than nearly anything else I own (which isn't much).  Actually,