What can you tell me about Fortes 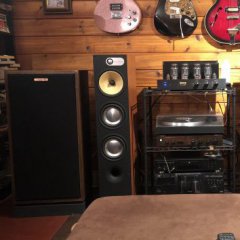 IMHO, these various Klipsch speakers have very good bass performance down to the mid-30 Hz.  Speakers from other manufacturers often don't go that low. &#1

I guess I’m allowed to threadmance my own thread.  Almost a year after I started this post, and nine months since I last posted, the Fortes are now sitting in front of me.   I’m currently li

The Forte and Forte II are awesome speakers.   For $400, I would always buy a pair of Forte.