By Heritage_Head,
June 17, 2019 in Technical/Restorations

Not much of these are actually Klipsch, other than the HF Lens. Dressed up with the Walnut, they look pretty good (to me) and sound great!

I've maintained for years that Klipsch should offer the LaScala in two versions.  One with the stock tophat and the other with the 510 inside.  They already make the top separate from the bass bin so 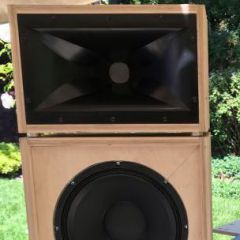 Maybe my memory is fading from Pilgrimage already, but with my latest DSP settings my K510 setup reminds me most of the Jube demo than anything I heard in the Heritage room.  The k510s fill the entire